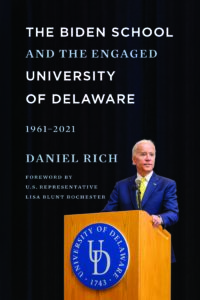 This book reviews the history of the Joseph R. Biden, Jr. School of Public Policy and Administration from 1961 to 2021. The focus is on the school’s accomplishments over its first sixty years, how they were achieved, and why they are significant. The analysis describes the challenges and opportunities that shaped the school’s development and its emergence as one of the nation’s leading public affairs schools. What began in 1961 as an experimental program supported by a single external grant emerged six decades later as one of the nation’s leading comprehensive schools of public affairs. That transformation unfolded during one of the most dynamic periods in the history of higher education when the public purpose of universities was expanded. The history of the Biden School is a story of institutional innovation, perseverance, adaptation, and resilience.