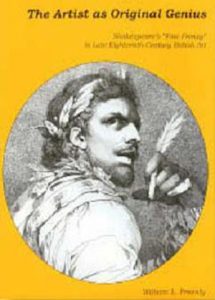 This book examines the first generation of artists in Britain to define themselves as history painters, attempting what then was considered to be art’s most exalted category. These ambitious artists, including John Hamilton Mortimer, Henry Fuseli, Alexander and John Runciman, James Barry, James Jefferys, George Romney, John Flaxman, and William Blake, most of whom were born in the 1740s and 60s, were presented with the challenge of how best to compete with the continental old masters when they had only an impoverished native tradition on which to build. They cultivated the concept of the artist as an original genius, a psychological strategy born out of deep-seated anxiety. At the core of this identity formation was the artists’ perception of William Shakespeare, whom they recast as the original genius incarnate. They strove to accomplish in art what they perceived he had accomplished in literature. Theseus’s lines in A Midsummer Night’s Dream, “The poet’s eye, in a fine frenzy” (V.i.12) personified for them the Shakespeare of their imagining, and this conception of fine frenzy became the touchstone for their artistic identities, profoundly influencing both their lives and their art. This book pays special attention to their self-portraits in which they proclaim this new identity, one that emphasizes the impassioned and extravagant nature of their personal vision and their claims to original genius. The book includes more than 120 black-and-white illustrations.

About the Author
William L. Pressly is a Professor in the Department of Art History and Archaeology at the University of Maryland.