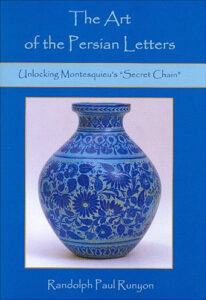 Some thirty years after the initial publication of Montesquieu’s Persian Letters in 1721, the author hinted at the presence of “a secret, and somehow unnoticed, chain” tying together this entertaining, insightful, yet disparate collection of fictional letters to and from two Persian travelers in France. Ever since Montesquieu’s subtle hint, readers have tried to identify the chain, but the riddle has resisted solution. The reason may be that no one has actually looked for a hidden chain-composed of separate links—but instead for a unifying theme. In The Art of the Persian Letters Randolph Runyon takes the chain metaphor seriously, showing that the chain is not thematic but linguistic and structural, as each letter is linked to its neighbors on either side by echoing words and situations despite their different contexts. Montesquieu’s epistolary novel emerges as a delightfully self-referential work of art, full of hidden allusions to their persistently doubling structure.

About the Author
Randolph Paul Runyon is Professor of French at Miami University in Oxford, Ohio.