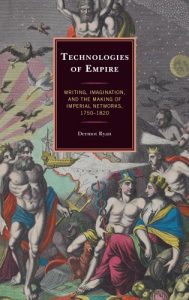 Technologies of Empire looks at the ways in which writers of the long eighteenth century treat writing and imagination as technologies that can produce rather than merely portray empire. Authors ranging from Adam Smith to William Wordsworth consider writing not as part of a larger logic of orientalism that represents non-European subjects and spaces in fixed ways, but as a dynamic technology that organizes these subjects and transforms these spaces. Technologies of Empire reads the imagination as an instrument that works in tandem with writing, expanding and consolidating the networks of empire. Through readings across a variety of genres, ranging from Smith’s The Wealth of Nations and Edmund Burke’s Reflections on the Revolution in France to Maria Edgeworth’s Irish fiction and Wordsworth’s epic poetry, this study offers a new account of writing’s role in empire-building and uncovers a genealogy of the romantic imagination that is shot through by the imperatives of imperialism.

About the Author
Dermot Ryan is assistant professor of English at Loyola Marymount University, Los Angeles.