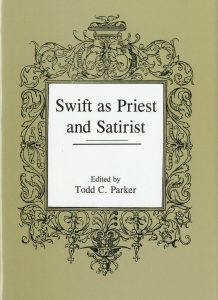 One of the most tendentious and enduring questions of Swift scholarship concerns his faith. What did Swift believe? Was his career in the Church primarily a means of political and social advancement? Did Swift subscribe to a coherent theology, or were his beliefs simply expedient? How did the turbulent streams of eighteenth-century Anglican and Protestant theologies influence Swift’s satiric vision? In the light of recent work on his tenure in the Church of Ireland, this volume presents a timely critical appraisal of Swift’s role as a priest vis-à -vis his identity as one of the Enlightenment’s premier satirists. The essays in this volume cover four broad categories: (1) Essays that historicize his relationship to the Church of Ireland and to the bruising world of eighteenth-century theological discourse in general. (2) Essays that examine how Swift represents religious figures and controversies in his poetry and prose, including a A Tale of a Tub. (3) Essays that theorize the relationships between religious and literary genres. (4) Essays that articulate the links between Swift’s satires and contemporary religious, philosophical, and scientific discourse.

About the Editor
Todd C. Parker is a member of the Society of St. Francis, an order of Franciscans in the Episcopal Church. He was formerly Associate Professor of English at DePaul University in Chicago.