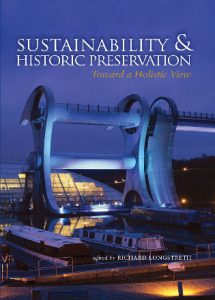 Sustainability & Historic Preservation: Towards a Holistic View broadens the horizons of the mushrooming drive to correlate the objectives of these two spheres. To date, discussions of the relationship between historic preservation and sustainability have generally focused on the energy consumption of buildings. The nine chapters in this book show how that agenda can and should be expanded by examining many other facets of the environment, including agricultural lands, urban waterworks, irrigation systems, natural settings, an arboretum, and post-World War II suburbs. Written by specialists from a variety of disciplines—anthropology, architecture, landscape architecture, and urban history among them—the contents explore new realms in which historic preservation and sustainability can have common purpose. This book addresses subjects of concern to many persons engaged in both fields and argues the case for creating a greater spectrum of common ground between them.

About the Editor
Richard Longstreth is professor of American studies and director of the Graduate Program in Historic Preservation at George Washington University. A past president of the Society of Architectural Historians, he has written extensively on historical and preservation subjects. His most recent books include The American Department Store Transformed, 1920-1960 (2010) and two edited volumes: Housing Washington: Two Centuries of Residential Development and Planning in the National Capital Area (2010) and Cultural Landscapes: Balancing Nature and Heritage in Preservation Practice (2008).