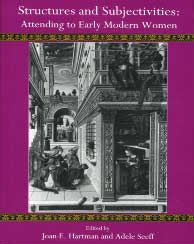 “Structures and Subjectivities” refers to what we can and probably cannot know about women in the early modern period. Scholars study the societal structures their disciplines call attention to; they are left to infer the subjectivities, the lived experience, of women whose lives they attempt to reconstruct. The authors of the essays in the volume, the fifth to emerge from conferences held by the University of Maryland’s Center for Renaissance & Baroque Studies, place the largest possible meanings on structures. They consider geographical boundaries and political and ecclesiastical institutions, the gendering of hierarchies and the power of place, the spaces that women constructed, inhabited, traveled in and worked in and, by extension, the literary and artistic conventions that both enabled and constrained their artistic production. They also consider, in several essays on pedagogy, the structures in which they and their students pursue the study of early modern women: institutions, departments, and classrooms.

About the Editors
Joan E. Hartman is Professor of English Emerita at the College of Staten Island, The City University of New York.
Adele Seeff is the Director of the Center for Renaissance & Baroque Studies at the University of Maryland.