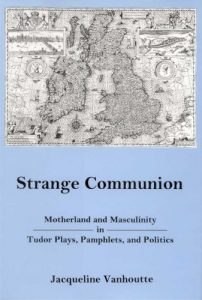 Strange Communion concerns the development in Tudor culture of a tendency to identify the common good with the health of the “motherland.” Playwrights, polemicists, and politicians such as John Bale, Richard Morison, and William Shakespeare, among others, relied on maternal representations of England to evoke a sense of common purpose. Vanhoutte examines how such motherland tropes came to describe England, how they changed in response to specific political crises, and how they came, by the end of the sixteenth century, to shape literary ideals of masculinity. While Henrician propagandists appealed to Mother England in order to enforce dynastic privilege, their successors modified nationalist symbols as to qualify absolute monarchy. The accessions of two queens thus encouraged a convergence of nationalist and patriarchal ideologies: in late Tudor works, evocations of the national “family” tend to efface class distinctions while reinforcing gender distinctions.

About the Author
Dr. Jacqueline Vanhouette is an assistant professor at the University of North Texas.