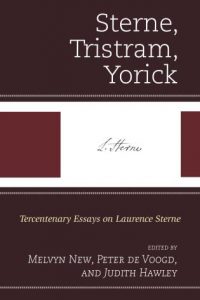 Sterne, Tristram, Yorick: Tercentenary Essays on Laurence Sterne derives from the Laurence Sterne Tercentenary Conference held at Royal Holloway, University of London, on July 8–11, 2013. It was attended by some eighty scholars from fourteen countries; the conference heard more than sixty papers. The organizers invited participants to submit revised versions of their contributions for this volume, and the thirteen selected exhibit, it is hoped, the defining features both of the conference and of Sterne studies at the beginning of the twenty-first century. It is worth remarking that the selected authors represent seven countries; that Sterne may well be the most internationally accepted of all eighteenth-century English authors is certainly a claim worthy of a sentimental traveler.

This collection recognizes three faces of Sterne, beginning with several biographical essays examining, respectively, his celebrity status, family life, politics, and philosophy. The second face is that of Tristram, studied from vantage points provided by ethics, linguistics, gender studies, and comparative literature. The final group of essays examines the face of Yorick as the protagonist of A Sentimental Journey, beginning with an ethnographic study of relationships, moving through questions of identity, and concluding with the possible future of literary studies—a return to aesthetics.