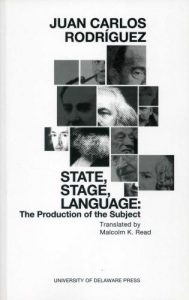 Juan Carlos Rodríguez’s State, Stage, Language: The Production of the Subject, now in its third Spanish edition (2001), first appeared in 1984, and has become, alongside his Theory and History of Ideological Production (1974, 1990), one of the classic texts to emerge from the Althusserian tradition. Rodríguez’s project is to analyze the ideological unconscious that always exists, without becoming explicit, in any discursive field. Ideology is unconscious because we live it without noticing it, and we fail to notice it because it is visible only as the effect of a specific set of social relations. Rodrí­guez surprises the ideological unconscious at work within linguistics (Chomsky), the classic theater (Diderot and Moratí), various poetic traditions (Mallarmé, Machado, and Alberti), the realist novel and detective fiction (Baroja, Chandler), and the vampire myth (Stoker, Borges). In the process, he overcomes a variety of obstacles that had previously blocked the development of Marxist history.

About the Author
Juan Carlos Rodrí­guez holds the Chair of Sociology of Literature at the University of Granada.

About the Translator
Malcolm K. Read is a professor at the State University of New York at Stony Brook.