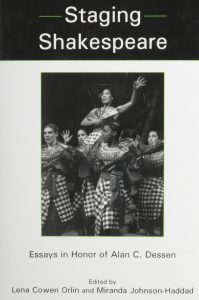 The twelve essays in this volume explore the relationships between Shakespearean pedagogy, performance, and scholarship. The volume consists of four sections: “Acts of Recovery,” which includes essays that take an historicist approach to performance concerns; “Performing the Moment,” in which the authors describe their experiences staging a particular Shakespearean scene in an actual production; “Recordings,” or analyses of Shakespearean productions that were preserved on film or audiotape; and “Extensions and Explorations,” discussions of adaptations and variations of Shakespeare’s plays on stage. Throughout the volume the authors examine the ways in which performance criticism and performance studies illuminate our approaches to those texts.

About the Editors
Lena Cowen Orlin is Professor of English at the University of Maryland Baltimore County.
Miranda Johnson-Haddad is an independent scholar.