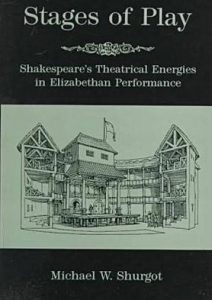 Stages of Play assumes that Shakespeare wrote scripts for actors and audiences, not texts for readers; and second, that we can best appreciate how Shakespeare’s scripts create dramatic meaning by attempting to visualize their performances in the theatrical settings for which they were originally created—the Theatre and the Globe. The argument is presented that with spectators arranged on three sides around the structure, complex and often divergent spectator reactions to the actual performance of the plays were created.