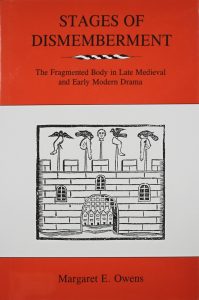 With a focus on visual representations of beheading, dismemberment, and mutilation in medieval and early modern drama, this study traces the impact of the Reformation on the semiotics of the body. What emerges from this exploration of violent spectacle is a sense of the complex and powerful ways in which the legacy of the pre-Reformation religious drama informed the professional drama of the late sixteenth and seventeenth centuries. This study considers a broad range of plays dating from the fifteenth century to the closing of the theaters in 1642; however, separate chapters are devoted to extensive analysis of Apius and Virginia, 2 Henry VI, and Doctor Faustus. While this book participates in the attentiveness to violent spectacle that has dominated post-Foucauldian literary and cultural studies, the goal is to move beyond Foucauldian commonplaces, not only by paying close attention to cultural and theatrical contexts but also by drawing upon psychoanalytic models of recursive temporality, especially the concepts of traumatic repetition, the work of mourning, and the uncanny return of the repressed.