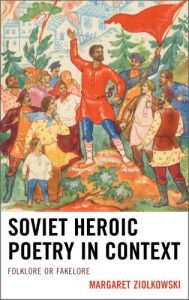 Soviet Heroic Poetry in Context discusses key issues surrounding the composition and recording of folklore as well as its often intensely political aspect and its preoccupation with chimerical cultural authority. These issues are dramatically displayed in Soviet epic compositions of the 1930s and 1940s, the so-called noviny (“new songs”), which took their formal inspiration largely from traditional Russian epic songs, byliny (“songs of the past”), and their narrative content from contemporary, political, and other events in Stalinist Russia. The story of the noviny is at once complex and comprehensible. While it may be tempting to interpret the excrescences of Stalinism as unique aberrations, the reality was often more complicated. The noviny were not simply the result of political fiat, an episode in an ideological vacuum. Their emergence occurred in part because of specific trends and controversies that marked European folklore collection and publication from at least the late eighteenth century on, as well as developments in Russian folkloristics from the mid-nineteenth century on that assumed exaggerated proportions. The demise of the noviny was equally mediated by a host of political and theoretical considerations. This study tells the story of the rise and fall of the noviny in all its cultural richness and pathos, an instructive tale of the interaction of aesthetics and ideology.

About the Author
Margaret Ziolkowski is professor of Russian at Miami University (Ohio). She has worked on topics in Russian literature ranging from the medieval to the contemporary.