University of Delaware Press
by Paul Trolander and Zeynep Tenger 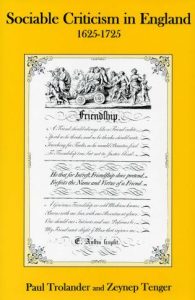 Sociable Criticism in England, 1625-1725 explores how for the period 1625 to 1725 cultural practices and discourses of sociability (rules for small-group discussion, friendship discourse, and patron-client relationships) determined the venues within which critical judgments were rendered, disseminated, and received. Previous histories of criticism for this period have treated either the theoretical context along with the practical methods of printed criticism, or the political ideologies printed criticism often reinforced. This study focuses instead on the interpersonal dimensions of seventeenth-century criticism. In important reinterpretations of such major literary figures as Katherine Philips, George Villiers, John Dryden, Lady Mary Cavendish, John Dennis, and Joseph Addison, it argues that critical judgments could circulate either orally, in manuscript, or in print so long as they appeared to originate in interpersonal encounters.

About the Authors
Paul Trolander and Zeynep Tenger are Professors of English at Berry College.