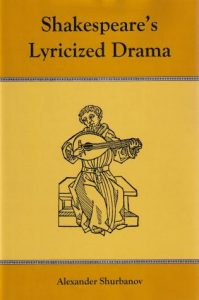 We are so used to calling the plays written by Shakespeare and his contemporaries “poetic drama” that we hardly ever stop to think about the generic meaning of the term. This book is an attempt to explore Shakespeare’s artistic achievement as an intricate blend of the dramatic and lyrical modes. In a series of minute textual analyses, it traces the gradual integration of the two from Love’s Labour’s Lost through Romeo and Juliet and Richard II to As You Like It and Hamlet, with a final glance at the Great Tragedies. How this combination is effected in its details is a question that might help us to understand better the specificity of Shakespeare’s innovative work for the theatre and the power of its impact.

About the Author
Alexander Shurbanov is a Professor in the English Department at Sofia University.