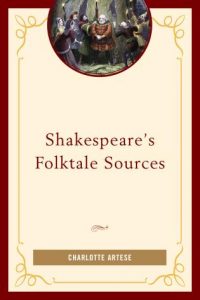 Shakespeare’s Folktale Sources argues that seven plays—The Taming of the Shrew, Titus Andronicus, The Merry Wives of Windsor, The Merchant of Venice, All’s Well that Ends Well, Measure for Measure, and Cymbeline—derive one or more of their plots directly from folktales. In most cases, scholars have accepted one literary version of the folktale as a source. Recognizing that the same story has circulated orally and occurs in other medieval and early modern written versions allows for new readings of the plays. By acknowledging that a play’s source story circulated in multiple forms, we can see how the playwright was engaging his audience on common ground, retelling a story that may have been familiar to many of them, even the illiterate. We can also view the folktale play as a Shakespearean genre, defined by source as the chronicle histories are, that spans and traces the course of Shakespeare’s career. The fact that Shakespeare reworked folktales so frequently also changes the way we see the history of the literary folk- or fairy-tale, which is usually thought to bypass England and move from Italian novella collections to eighteenth-century French salons. Each chapter concludes with a bibliography listing versions of each folktale source as a resource for further research and teaching.

About the Author
Charlotte Artese is associate professor of English at Agnes Scott College. She has published articles on The Faerie Queene and Utopia as well as on Shakespeare’s folktale sources.

“
Such an approach makes this excellent book valuable to both Shakespeare and folklore scholars. […] This fresh approach provides a carefully and gradually constructed analysis.
”
- Folklore
“
Charlotte Artese’s Shakespeare’s Folktale Sources is set to become the go-to study for anyone interested in how Shake-speare put folktales to use in his plays.
”
- Studies in English Literature
Library, Museums and Press
181 South College Avenue, Newark, DE 19717-5267