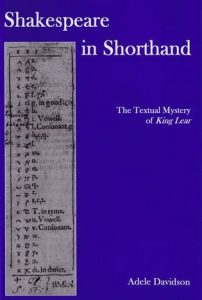 The year 2008 marked the four hundredth anniversary of the first publication of King Lear, and for four centuries the play has remained a consummate bibliographical mystery. The earliest quarto (1608) prints apparent nonsense and seemingly insoluble cruxes. Shakespeare in Shorthand solves the textual puzzle and shows that many textual anomalies derive from the play’s transcription in Elizabethan shorthand. The shorthand system of John Willis, Stenographie, first published in 1602, shows a high correlation with the unusual orthography and textual features of the Lear quarto. This book, which was the 2007 winner of the Jay L. Halio Prize in Shakespeare and Early Modern Studies, combines textual and bibliographical analysis with a cultural history of early modern stenography and an examination of shorthand sermons to show that knowledge of shorthand can clarify the textual interrelation of the quarto and folio versions of Lear. Some textual differences that are often ascribed to authorial revision are shown to derive instead from processes of transcription and transmission in abbreviated writing.

About the Author
Adele Davidson teaches at Kenyon College.