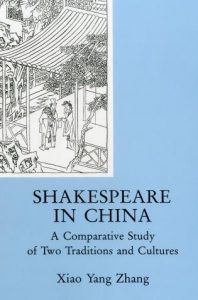 Shakespeare in China is an attempt to explore systematically and deeply the nature and significance of the interaction between Shakespeare and traditional Chinese drama and between the dramatist and Chinese culture. Ever since Shakespeare was introduced into China at the beginning of this century, his works have exerted a pervasive influence upon Chinese theater and culture. During this process of transplantation into Chinese culture, the dramatist’s works have also undergone some transformation, with the plays interpreted and reshaped by the Chinese from the perspective of their own culture and tradition.

The value of the book is not limited to the scope of Shakespeare studies and comparative literature. With the combination of the literary criticism and sociological approach, it describes and investigates a variety of social and psychological phenomena in the process of cultural exchange between the West and the East. The book also provides a brief view of the social, political, and historical changes in modern China for Western readers.