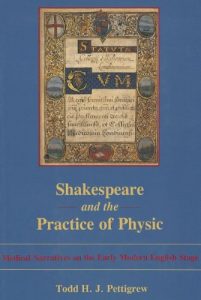 By Shakespeare’s time, the debate over legitimate medical practice had become vociferous and public. The powerful College of Physicians fought hard to discredit some and reign in others, but many resisted, denied, or ignored its authority. Dramatists did not fail to notice the turmoil, nor did they fail to comment on it—and no one commented more profoundly on stage than William Shakespeare. Going beyond the usual questions posed about Shakespeare and medicine, this study, which won the first Jay L. Halio Prize in Shakespeare and Early Modern Studies, explores Shakespeare’s response to the early modern struggle for control of English medical practice. It does not rehearse the fundamentals of early modern medical thought such as the humoral system that have been more than adequately covered numerous times elsewhere. Instead, it undertakes a reading of popular English medical tracts in an effort to reconstruct the terms in which medical practitioners of all kinds were understood. Those who were not busy telling stories about the treatment of illness and injury were busy hearing such stories, and in a time of spectacular outbreaks of infectious disease, in a time of religious transition, and in a time of shifting modes of political power, such stories, held especial fascination.

About the Author
Todd H. J. Pettigrew is an Associate Professor of English at Cape Breton University.