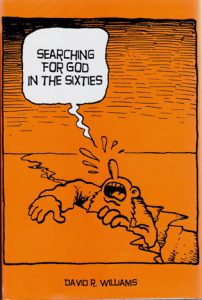 This paradigm-breaking book dares to rethink the whole of the ’60s experience, not from a political or sociological but from an historical/theological perspective. Camille Paglia wrote that “the spiritual history of the sixties has yet to be written.” This is that book. The book’s chapters each correspond to a line in Emily Dickinson’s poem “Finding is the first act.” The parallel to Dickinson’s experience in the psychic wilderness demonstrates just how much the experience of the ’60s was part of an ongoing American story not an aberration. Though it seems contradictory, this book argues for an appreciation of the three ’60s: 1960s, 1860s, 1660s, each a chapter of the religious core of the American story.

About the Author
David R. Williams earned a Masters in theology from Harvard Divinity School and a PhD in American civilization from Brown. He was a Fulbright Scholar in Czechoslovakia in 1991.