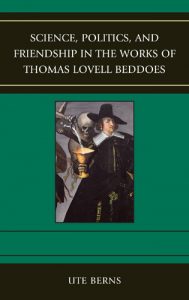 This study revaluates the work of the scientist and radical, poet and dramatist and English exile in Germany Thomas Lovell Beddoes (1803-1849). While his writing has elicited high praise from poets ranging from Robert Browning through Ezra Pound to John Ashbery, scholars have frequently neglected it on grounds of its purportedly morbid and opaque eccentricity. Countering this scholarly perception, this book deftly relocates Beddoes’s poetry, drama and prose at the centre of Anglo-German debates on aesthetics and life science, politics and theatre in an early nineteenth-century European context. Aided by his letters from Germany, the book re-creates the intercultural discursive universe in which Beddoes easily moves from Shakespeare’s plays or the aesthetic experiments of Shelley and his circle to Goethe and to topics debated among Heinrich Heine and the Jungdeutschen, from the most advanced contemporary scientific research to the post-Napoleonic politics of the German radical students’ organisations, and from Byron, Baillie and London’s illegitimate theatre to Schiller’s and Tieck’s highly charged reflections on male-male friendship. The study combines historicist strategies with theories of performance, performativity, and visuality as it focuses, in particular, on Beddoes’s major and defining work, Death’s Jest-Book, first completed in 1829 and published posthumously after much revision in 1850. This study shows how Death’s Jest Book, as both drama and poetry, devises complex perspectives on scientifically inspired notions of ‘life’ and history, how it forges a radical vision for post-Napoleonic Europe and how it links this vision to a daring conception of desiring, gendered selves. The book pays close attention to the dialogue Beddoes’s writing maintains with Early Modern literature, and it highlights the proto-modernist features that link his work to that of Büchner, Grabbe and a European theatre avant-garde. This innovative study of Beddoes’s work, cutting across current investigations into politics, gender, and science in intercultural Romantic Studies should be of interest to scholars and students of British Romantic and Victorian studies as well as of German Vormärz studies, and to students and scholars of drama and theatre as well as Queer studies.

About the Author
Ute Berns is professor of English literature at the University of Hamburg.