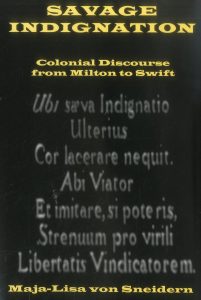 Savage Indignation is about a flexible and indiscriminate discourse during the window of license occurring between the end of an English divine polity (1649) and the emergence of science as arbiter of “true discourse” (ca. 1734). Rather than tracing the development of the expedient language of empire and ideological success, the book analyzes the resistance and the waste that are integral to that spectacle of the bourgeois progress. Theoretically informed by Foucault and others, the readings of Milton’s late poems, the Oroonoko texts, and Scriblerian efforts attend to denotative and connotative limits of the language, and they incorporate contemporary ephemera to expand the amplitude of potential signification. During the period, von Sneidern concludes, proprietary discourse and the language of trespass had not yet been converted into the language of duty. Just about anything could and was said, to the “ingenious” reader’s wonder, merriment, and considerable uneasiness of mind.

About the Author
Maja-Lisa von Sneidem, Editorial Associate for Arizona Quarterly, teaches part-time at the University of Arizona South.