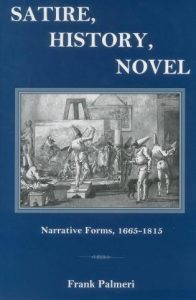 Displacing the novel from the central position it has held in studies concerned with the origin or rise of the English novel, Satire, History, Novel considers novelistic forms as part of a network of complementary and competing genres, including conjectural histories and narrative satires, and regards relations among these forms as most significant and revealing. This is the first book to explore the emergence and the fading of narrative genres in the context of successive cultural paradigms and the uneven development of public spheres. Analyzing works written over a century and a half in three national cultures, including canonical literature by Swift, Fielding, Burney, Voltaire, Diderot, and Goethe; less familiar but important and influential narratives by Delarivire Manley, Prvost, and Wieland; almanacs and popular novels by Courtilz de Sandras and Defoe; as well as philosophical and conjectural histories by Hume, Rousseau, Gibbon, and Kant, Satire, History, Novel will contribute to intellectual history, public spheres studies, theories of narrative, scholarship on eighteenth-century literature and culture, as well as the relations of literature and philosophy to their historical contexts.

About the Author
Frank Palmeri is Professor of English at the University of Miami.