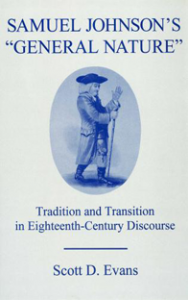 This study illuminates the importance and meaning of the term “author” in eighteenth-century discourse from the perspective of its prominent usage by Samuel Johnson. It explains Johnson’s employment of “nature” in his periodical essays, his qualified endorsement of the new science, and his commendation of Shakespeare’s drama and other literary works on the basis of their “just representation of general nature.”