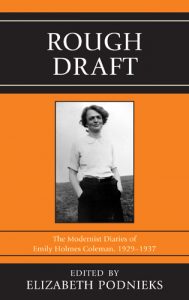 Rough Draft: The Modernist Diaries of Emily Holmes Coleman, 1929-1937 is an edited selection, published here for the first time, of the diaries kept by American poet and novelist Coleman during her years as an expatriate in the modernist hubs of France and England. During her time abroad, Coleman developed as a surrealist writer, publishing a novel, The Shutter of Snow, and poems in little magazines like transition. She also began her life’s work, her diary, which was sustained for over four decades. This portion of the diary is set against the cultural, social, and political milieu of the early twentieth century in the throes of industrialization, commercialization, and modernization. It showcases Coleman’s often larger-than-life, intense personality as she interacted with a multitude of literary, artistic, and intellectual figures of the period like Djuna Barnes, Peggy Guggenheim, Antonia White, John Holms, George Barker, Edwin Muir, Cyril Connolly, Arthur Waley, Humphrey Jennings, Dylan Thomas, and T.S. Eliot. The book offers Coleman’s lively, raw, and often iconoclastic account of her complex social network. The personal and professional encouragements, jealousies, and ambitions of her friends unfolded within a world of limitless sexual longing, supplies of alcohol, and aesthetic discussions. The diary documents the disparate ways Coleman celebrated, just as she consistently struggled to reconcile, her multiple identities as an artistic, intellectual, maternal, sexual, and spiritual woman. Rough Draft contributes to the growing modernist canon of life writings of both female and male participants whose autobiographies, memoirs, and diaries offer diverse accounts of the period, like Ernest Hemingway’s A Moveable Feast, Gertrude Stein’s The Autobiography of Alice B. Toklas, Sylvia Beach’s Shakespeare and Company, and Robert McAlmon and Kay Boyle’s Being Geniuses Together.

About the Editor
Elizabeth Podnieks is associate professor of English at Ryerson University.