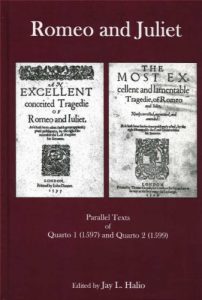 Using this edition, the reader may see at once how Shakespeare’s manuscript of the play, upon which the second quarto (Q2) is based, was adapted for the Elizabethan stage by the author and/or his colleagues. Q1 is considerably shorter than Q2. While many long speeches are cut, abbreviated, or revised, the structure of the play remains essentially as Shakespeare originally conceived it. Q1 is thus quite different, for instance, from Q1 Hamlet, whose provenance is still open to debate. While both of these early quartos were once believed to be memorial reconstructions, and thus “Bad” quartos, the theory of memorial reconstructions has now been seriously disputed. One of the essays appended to Halio’s edition, “Handy-Dandy: Q1/Q2 Romeo and Juliet,” discusses this issue and brings fresh evidence to bear to show that Q1 Romeo is not truly a “Bad” quarto, as A. W. Pollard long maintained. In another essay, Halio offers a brief stage history of Romeo and Juliet. Many non-authorial changes in the texts of Shakespeare’s play were common in the eighteenth century. For example, Garrick introduced Juliet’s spectacular funeral procession at the end of act 4, along with many new songs. Later, the American actress Charlotte Cushman removed many of these interpolations and restored much of Shakespeare’s original text. Modern-dress productions of the play have often been staged, which introduced a good deal of modern technology into the action.

About the Editor
Jay L. Halio is Professor Emeritus of English at the University of Delaware.