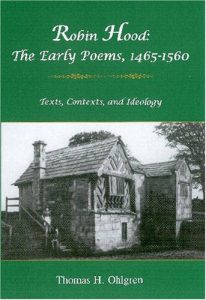 Previous scholarship on the early Robin Hood poems has tended to treat the three major works— Robin Hood and the Monk, Robin Hood and the Potter, and A Lytell Geste of Robyn Hode —as a homogeneous group with a common audience and ideology. In this new study, Thomas H. Ohlgren demonstrates that each work must be evaluated according to its own history, production, ownership, transmission, and reception. Employing a variety of archival and genealogical approaches, Ohlgren not only identifies the original owners of the two Cambridge manuscripts—a significant finding in itself—but also places each of these works, including the seven different editions of the Geste, into its own time, place, and cultural register. Ohlgren’s findings should provoke and stimulate new research in Robin Hood studies. The book is accompanied by an appendix on dialects and language by Lister M. Matheson.

About the Author
Thomas H. Ohlgren is Professor of English and Medieval Studies at Purdue University.