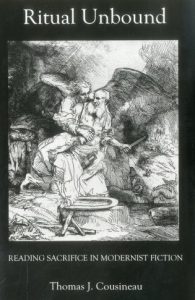 This study explores the vestiges of primitive sacrificial rituals that emerge in a group of canonical modernist novels, including The Turn of the Screw, Heart of Darkness, The Good Soldier, The Great Gatsby, and To the Lighthouse. It argues that these novels reenact a process that achieved its seminal expression in the Genesis story of “The Binding of Isaac,” in which Abraham, having been prevented from sacrificing Isaac, offers up a ram in his place. Modernist reenactments of this pattern present narrators who, although vigorously protesting the victimization of certain characters, unfailingly seize upon others as their surrogates. Each novel is designed in such a way, however, as to resist the reconstruction of a sacrificial ritual to which its narrator is prone. The resulting tension between the binding and unbinding of ritual persecution dramatizes the paradox that we can neither believe convincingly in the guilt of our scapegoats nor imagine a society that has dispensed with them entirely.

About the Author
Thomas J. Cousineau is Professor of English at Washington College in Maryland.