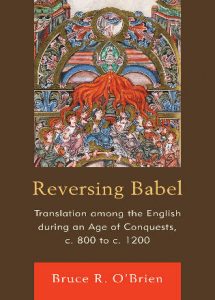 Reversing Babel: Translation among the English during an Age of Conquests, c. 800 to c. 1200, starts with a small puzzle: Why did the Normans translate English law, the law of the people they had conquered, from Old English into Latin? Solving this puzzle meant asking questions about what medieval writers thought about language and translation, what created the need and desire to translate, and how translators went about the work. These are the questions Reversing Babel attempts to answer by providing evidence that comes from the world in which not just Norman translators of law but any translators of any texts, regardless of languages, did their translating.

Reversing Babel reaches back from 1066 to the translation work done in an earlier conquest—a handful of important works translated in the ninth century in response to the alleged devastating effect of the Viking invasions—and carries the analysis up to the wave of Anglo-French translations created in the late twelfth century when England was a part of a large empire, ruled by a king from Anjou who held power not only in western France from Normandy in the north to the Pyrenees in the south, but also in Ireland, Scotland, and Wales. In this longer and wider view, the impact of political events on acts of translation is more easily weighed against the impact of other factors such as geography, travel, trade, community, trends in learning, ideas about language, and habits of translation. These factors colored the contact situations created in England between speakers and readers of different languages during perhaps the most politically unstable period in English history. The variety of medieval translation among the English, and among those translators working in the greater empires of Cnut, the Normans, and the Angevins, is remarkable. Reversing Babel does not try to describe all of it; rather, it charts a course through the evidence and tries to answer the fundamental questions medieval historians should ask when their sources are medieval translations.

About the Author
Bruce O’Brien is professor of history at the University of Mary Washington, a visiting fellow at the Institute of Historical Research in London, and was a visiting fellow at Harvard Law School. He is also chair of the literary board of the Early English Laws project.