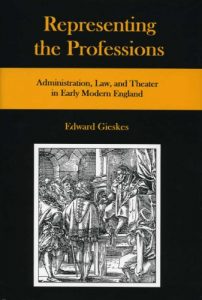 Representing the Professions unites literary criticism, social and legal history, and Pierre Bourdieu’s sociology of culture. It offers a detailed exploration of the professionalization of selected early modern disciplines in an effort to characterize those disciplines in their social, economic, and historical contexts. Unlike recent work on individual responses to social change, Representing the Professions discusses how developing professions responded to changes such as the Tudor centralization of authority, the enormous growth of legal business, the expansion of both literacy and an entertainment market, and the growth of the theater. The book moves between a broad and narrow historical focus to describe how institutional and individual histories contstruct early modern versions of professionalism. Patterns established in the sixteenth and seventeenth centuries have effects that shape subsequent developments in the literary profession and professions more generally. This study produces a structural history of the early modern professions that will provide insights into later developments in the more general process of professionalism in later centuries. Using various sources, including plays by Shakespeare and his contemporaries, legal documents, manuscript handbooks, theatrical records, and public papers related to the Tudor monarchy, the author shows how early modern administration, law, theater, and writing gave rise to an embracing professional field whose parameters continue to play a major role in the ongoing constitution and reconstitution of modernity.

About the Author
Edward Gieskes teaches Shakespeare and early modern drama at the University of South Carolina.