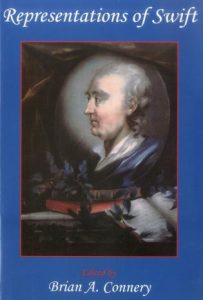 This collection offers not only the “representations of Swift” to which its title refers but also a representation of Swift scholarship at the close of the twentieth century and a return to fundamental questions about the life, writing, and views of Swift, issues raised in part by literary scholarship’s return to historicism but also powerfully suggestive of a return to biography: What was Swift’s attitude toward and relation with Ireland? What was the nature of his relationships, both literary and personal, with women? What were his literary goals? His literary disappointments? What was his relation with the poor in the Liberties of St. Patrick’s? What does his work say to us about the present moment? These thirteen essays, from both young scholars and distinguished authors of landmark studies, are remarkable for their relentless curiosity about the man who produced the work, his representations by others, his teasing of readers with gaps and fragments, his playful and serious disguises, and his rampant ironies.

About the Editor
Brian A. Connery is Professor of English at Oakland University.