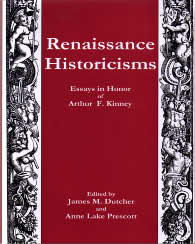 This collection of various approaches to early modern England offers readers such pleasures as the most complete bibliography to date of King James’s poetry, a unique edition of a memoir by the son of Sir Martin Barnham, as well as new arguments about Skelton, More, Elyot, Marguerite de Navarre, Sidney, Spenser, Daniel, Shakespeare (The Comedy of Errors), the Henriad, Macbeth, The Winter’s Tale, Mary Wroth, Isabella Whitney, and Marvell. Here too are new approaches to such topics as the royal succession, Shakespeare’s “bad” quartos, romance, witches, politics, humanism, English and Irish identity, and “conversations about women,” finishing with an essay about. . .”nothing.” As Arthur Kinney has wryly noted, “no text is innocent,” and in this volume many texts are made to confess who and what they are.