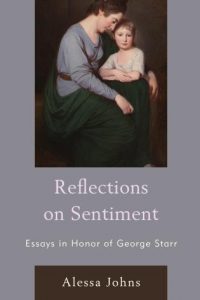 Reflections on Sentiment not only addresses current scholarly interest in feeling and affect but also provides an occasion to celebrate the career of George Starr, who, in more than fifty years of incisive scholarship and committed teaching, has elucidated the work of Daniel Defoe and the role of sentimentalism in what was once reductively termed an age of reason and realism. Due to the critique Starr spearheaded, scholars today can approach with greater assurance the complex interplay of reason and emotion, thought and sensibility, science and feeling, rationality and enthusiasm, judgment and wit, as well as forethought and instinct, as these shaped the scientific, religious, political, social, literary, and cultural revolutions of the Enlightenment.

Indeed, contributors to this anthology take inspiration from Starr’s work to shed new light on Enlightenment thought and sociocultural formations generally, offering fresh interpretations of a period in which Reflection and Sentiment circulated, mutually influenced each other, and contended equally for cultural attention. In nine separate essays they explore: the ways sentiment and sentimentalism inflect the moral and ideological ambit of Enlightenment discourses; the sociopolitics of religious debate; the issues promoted by women writers, by gender and family relations; the artistic and rhetorical uses of lived language; the impacts of cultural developments on novelistic form; and the wide shifts in the literary marketplace. Deploying tools advanced by new work in animal studies, gender criticism, media analysis, genre studies, the new formalism, and ethical inquiry, and enabled by the power of digitization and new databases, the authors of this volume explain how and to what ends denizens of the Enlightenment were touched and moved.

About the Editor
Alessa Johns is professor of English at the University of California, Davis.