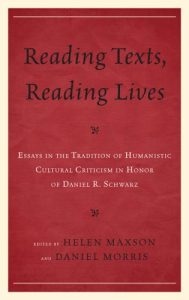 Our culture attempts to separate competing ideological factions by denying relationships between multiple perspectives and influences outside of one’s own narrow interpretive community. The distinguished essayists in this volume find Daniel R. Schwarz’s pluralistic, self-questioning approach to what he calls “reading texts and reading lives” quite relevant to the current historical moment and political situation. A legendary scholar of modernist literature, Schwarz’s critical principles are a healthy corrective to cultural hubris.

The essayists treat works ranging from fictions by Joyce, Conrad, Morrison, and Woolf to the poetry to Yeats, to Holocaust literature, to the environmental writings of Wendell Berry, to the photographs of Lee Friedlander. The authors focus on different works, but they follow Schwarz in stressing formal elements most often associated with traditional realism while keeping an eye on historical and author-centered approaches. The essayists also follow Schwarz in their emphasis on narrative cohesion and in how they look for signs of agency among characters who possess the will to alter their fate, even in a seemingly random universe such as the one depicted by Conrad. Readers with eyes to ethics and aesthetics, they follow Schwarz in encouraging a values-centered approach that leaves room for the reader to address the ways in which reading a text correlates to the reader’s ability to find meaning and value in experience outside the text. Like Schwarz, the essays look for intentionality of authorial meaning (rather than something called an “author function”) as well as for the relationship between lived experience and the imagined world of the literary work (rather than the endless semiotic play of an ultimately indecipherable text).