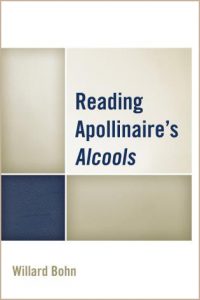 Reviewing the previous scholarship for seventeen of the most important poems in Alcools, this book provides a detailed analysis of each work and includes a state-of-the-art survey of current Apollinaire criticism. Besides acquainting readers with the existing scholarship, the book considers all the interpretations that have been proposed and indicates profitable directions to pursue. Each poem is subjected to a rigorous, line-by-line analysis that engages in a succession of dialogues with previous critics. The studies themselves are arranged in roughly chronological order, beginning with the “Rhénanes” in 1901-1902 and concluding with “Zone” in 1912. Although each chapter is basically conceived as an independent unit, readers are able to follow the evolution of Apollinaire’s aesthetics from his first mature creations through his subsequent experiments with fantastic, hermetic, visionary, and cubist poetry. At the same time, they witness Apollinaire’s personal evolution from his infatuation with Annie Playden through a period of deep depression, his love affair with Marie Laurencin, and the aftermath of that relationship.

About the Author
Willard Bohn is distinguished professor emeritus of French and Comparative literature at Illinois State University.