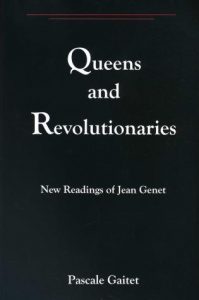 Queens and Revolutionaries proposes new readings of Genet that focus on the two areas that Saint Genet does not adequately address: sex and politics. The book first demonstrates how Sartre’s emphasis on a range of binary oppositions fails to do justice to the complex interplay of agency and determinism in Genet’s novels of the 1940s. Using contemporary feminist and gender theory to elucidate the fluctuations, oscillations, and reversals in Genet’s representations of cross-dressing and homosexuality, the readings show how these representations in turn reveal those theories’ limitations. The second half of the book turns to lesser-known work dating from the late 1960s onward, and to Prisoner of Love, in order to contest Sartre’s insistence on the non-political nature of Genet’s work. It examines Genet’s texts on the Black Panthers and the Palestinians, highlighting his political engagement after May 1968. It also traces the continuities from his earlier work, and shows how revolutionary aesthetics, theatricality, and performance are now increasingly reconceptualized as explicitly political acts.

About the Author
Pascale Gaitet is Professor of Literature at the University of California, Santa Cruz.