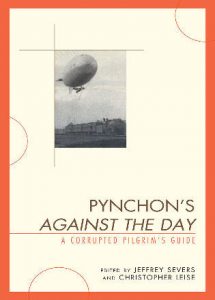 Thomas Pynchon’s longest novel to date, Against the Day (2006), excited diverse and energetic opinions when it appeared on bookstore shelves nine years after the critically acclaimed Mason & Dixon. Its wide-ranging plot covers nearly three decades—from the 1893 World’s Fair to the years just after World War I—and follows hundreds of characters within its 1085 pages. Pynchon’s Against the Day: A Corrupted Pilgrim’s Guide offers eleven essays by established luminaries and emerging voices in the field of Pynchon criticism, each addressing a significant aspect of the novel’s manifold interests. By focusing on three major thematic trajectories (the novel’s narrative strategies; its commentary on science, belief, and faith; and its views on politics and economics), the contributors contend that Against the Day is not only a major addition to Pynchon’s already impressive body of work but also a defining moment in the emergence of twenty-first century American literature.