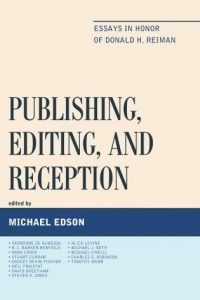 Publishing, Editing, and Reception is a collection of twelve essays honoring Professor Donald H. Reiman, who moved to the University of Delaware in 1992. The essays, written by friends, students, and collaborators, reflect the scholarly interests that defined Reiman’s long career. Mirroring the focus of Reiman’s work during his years at Carl H. Pforzheimer Library in New York and as lead editor of Shelley and His Circle, 1773–1822 (Harvard University Press), the essays in this collection explore authors such as Mary Shelley, William Hazlitt, Lord Byron and Percy Bysshe Shelley; moreover, they confirm the continuing influence of Reiman’s writings in the fields of editing and British Romanticism. Ranging from topics such as Byron’s relationship with his publisher John Murray and the reading practices in the Shelley circle to Rudyard Kipling’s response to Shelley’s politics, these essays draw on a dazzling variety of published and manuscript sources while engaging directly with many of Reiman’s most influential theories and arguments.

About the Editor
Michael Edson is assistant professor of English at the University of Wyoming.