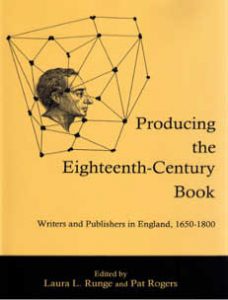 This volume includes twelve essays on the history of the book in the long eighteenth century that collectively argue for the importance of integrating literary scholarship and the various practices of book history. Themes include: a rectification of the tendency in literary studies to be blind to the materiality of the book; a focus on the ways that eighteenth-century expectations for books differ from contemporary ideas; the identification of the roles of writers and publishers as reciprocal and competing; the development of modern conventions of the material book; the ways in which the forms of books inform and influence literature and vice versa; the significance of commercial pressures on eighteenth-century book production; the parallels to be drawn between the eighteenth-century expansion of print and our own transformation to digital media. Detailed attention is given to Pope, Manley, Johnson, Richardson, Burney, Curll, and Dodsley among others. The book contains thirty-five illustrations.