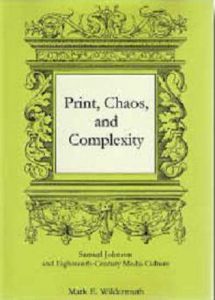 This book describes how eighteenth-century awareness of the interplay between fixity and instability in printed texts demonstrates the role print played in developing Samuel Johnson’s awareness of print culture’s impact on human beings ethically, politically, and aesthetically. The study traces the evolution and continuity of Johnson’s ideas in these areas by describing the importance of print mediation for Johnson’s approach to solving related epistemological and ethical dilemmas facing his generation from the Restoration to the late eighteenth century. Print, Chaos, and Complexity shows how Johnson’s non-fiction prose allows him to suggest that categories of truth and virtue may be stabilized when the orderly disorder of texts is properly conceptualized and used to inform the theory and practice of mimesis. Thus Johnson helps shape ideas on mediation, epistemology, ethics, and politics in the Age of Johnson in Great Britain (1755-84).

About the Author
Mark E. Wildermuth is a Professor of English Literature and a Dunagan Research Fellow at the University of Texas of the Permian Basin.