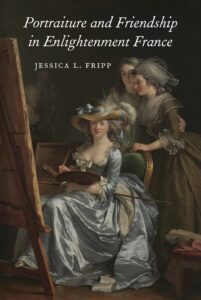 Reviews of 'Portraiture and Friendship in Enlightenment France'

“
Portraiture and Friendship in Enlightenment France is well researched and is particularly commendable in terms of its use of unexamined or understudied primary-source material. Fripp introduces texts—visual and written—that will be useful for scholars in a number of fields. It is a welcome addition to scholarship on sociability and portraiture and will be of interest to scholars in art history, cultural studies, and gender studies.
”
- Heather Belnap, Brigham Young University, author of Women, Femininity, and Public Space in European Visual Culture, 1789-1914
“
Portraiture and Friendship in Enlightenment France forges important new ground in several respects. Fripp makes a compelling case that the idea of friendship was a structuring principle that guided many aspects of the theory and practice of the Royal Academy of Painting and Sculpture, a gendered notion that operated differently for female and male artists, a tool that artists could employ to further their careers, and an important key to understanding the caricatures that circulated among members of the Academy, particularly when traveling abroad. Although many of the primary-source texts and images discussed will be familiar to specialists in eighteenth-century French painting, looking at these written and visual documents through the lens of friendship reveals new layers of meaning that have never before been discussed.
”
- Laura Auricchio, Dean, Fordham College at Lincoln Center, author of Adélaïde Labille-Guiard: Artist in the Age of Revolution
Library, Museums and Press
181 South College Avenue, Newark, DE 19717-5267