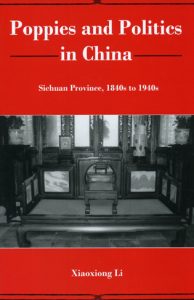 From the late nineteenth and early twentieth centuries, Sichuan Province was the largest opium-producing region in the largest opium-producing country, China. This book uses a chronological approach to describe and explain the rise and fall of opium in Sichuan. Through discussing the growth of opium production, the government policies toward opium and its usage, the impacts of opium on Sichuan politics and people’s lives, it tries to show how Sichuan’s economic, social, and psychological milieu influenced and shaped opium production and consumption, and seeks to illuminate how the changing political climate led to the opium prohibition campaign, as well as the results of these campaigns. The story of opium reflects the province’s ever-changing political reality, economic conditions, and social circumstances. Study of opium in Sichuan adds to the understanding of this issue across all of China.

About the Author
Xiaoxiong Li is a Professor in the Social Science Department at Plymouth State University.