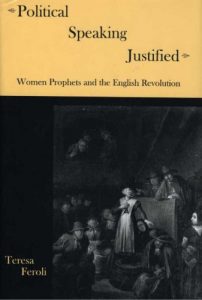 Political Speaking Justified traces the development of the idea of female political authority in three women prophets of the English Revolution. Following in the tradition of the Hebrew prophets, these women—Eleanor Davies, Anna Trapnel, and Margaret Fell—believed that God called them to communicate his will to the leaders of the nation. They entered the public sphere intent on bringing about a godly order and, as part and parcel of this goal, they deemed it necessary to create a political realm in which women’s voices could be heard. Feroli documents the ways in which these prophets’ claims for female political power emerge from meditations on monarchial authority; the period’s sensational sodomy trial, the Castlehaven scandal; fasting; and women’s right to preach in the church. Political Speaking Justified challenges the secular bias of conventional feminist genealogies and argues that the women prophets of the English Revolution inaugurate an early phase in the rise of modern feminist consciousness.

About the Author
Teresa Feroli is Assistant Professor of English at Polytechnic University, Brooklyn.