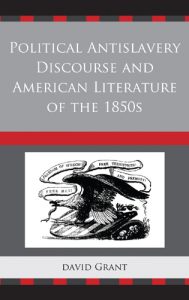 Appalled and paralyzed. Abandoned and betrayed. Cowed and bowed. Thus did Frederick Douglass describe the North in the wake of the compromise measures of 1850 that seemed to enshrine concessions to slavery permanently into the American political system. This study discovers in that feature of political anti-slavery discourse—the condemnation of an enfeebled North—the key to a wide variety of literary works of the 1850s. Both the political discourse and the literature set out to expose the self-chosen degradation of compromise as a threat at once to the personal foundation of each individual Northerner and to the survival of the people as an actor in history. The book fills a gap in literary criticism of the period, which has primarily focused on abolitionist discourse when relating anti-slavery thought to the literature of the decade. Though it owed a debt to the abolitionists, political anti-slavery discourse took on the more focused mission of offering a challenge to the people. Would the North submit to the version of self-discipline demanded by the Slave Power’s Northern minions, or would it tap the energy of the nation’s founding until it embodied defiance in its very constitution? Would the North remain a type for the future slave empire it could not prevent, or would it prophesy national freedom in the simple recovery of its own agency? Literary works in both poetry and prose were well suited to making this political challenge bear its full weight on the nation—fleshing out the critique through narrative crises that brought home the personal stake each Northerner held in what George Julian called an exodus from the bondage of compromise. By the end of 1860 this exodus had been completed, and that accomplishment owed much to the massive ten year cultural project to expose the slavery-accommodating definition of nationality as a threat to the republican selfhood of each Northerner. Stowe, Whittier, Willis, and Whitman, among others, devoted their literary works to this project.

About the Author
David Grant is a faculty member in the Department of English at Grant MacEwan University.