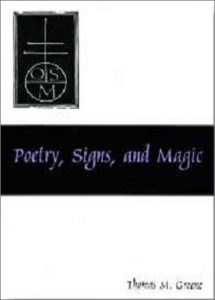 Poetry, Signs, and Magic brings together in a single volume fourteen new and previously published essays by the eminent Renaissance scholar and literary critic, Thomas M. Greene. This collection looks back toward two earlier volumes by Greene, his first essay collection The Vulnerable Text: Essays on Renaissance Literature, and Poesie et Magie, whose theme is here explored again at greater length and depth, from linguistic and literary critical perspectives. Greene argues that certain poetic gestures draw their peculiar strengths by serving as vestiges of poetry’s ancestral acts-magic, prayer, and invocation. Poetry, in other words, feigns an earlier power, but in this diminishment there occurs a verbal subtlety, and figural poignancy, commonly associated with art’s aesthetic pleasures. Greene employs his well-known skills as a close reader to texts by a range of writers to a variety of contemporary theorists. Greene’s central achievement amidst these readings is to isolate and describe in diverse contexts the distinction between disjunctive and conjunctive linguistics, dual theories of sound and meaning of crucial importance to Plato and Aristotle, to Catholic and Protestant debates on the sacraments, to the more recent skeptical methodologies of Derrida and de Man.

About the Author
Thomas M. Greene was a Professor of English and Comparative Literature at Yale University.