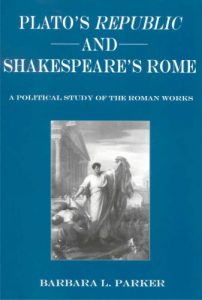 This pioneering study argues the influence of Plato’s political thought on Shakespeare’s Roman works: The Rape of Lucrece, Coriolanus, Julius Caesar, Antony and Cleopatra, and Titus Andronicus. It contends that Plato’s theory of constitutional decline provides the philosophical core of these works; that Lucrece, Coriolanus, Julius Caesar, and Antony and Cleopatra form a “Platonic” tetralogy collectively spanning the stages of timocracy, oligarchy, democracy, and tyranny; that this decline is prefigured and encapsulated in Titus Andronicus; and that all five works are oblique commentaries on England’s political milieu. Shakespeare equates the ruin of Rome with what he foresees as the corresponding decline of England deriving from England’s kindred political ills, in particular the burgeoning democratic impulses fostered by the politics of both Elizabeth and James—impulses potentially leading to popular rule and the ruin of the state.

About the Author
Barbara L. Parker is Professor of English at William Paterson University.