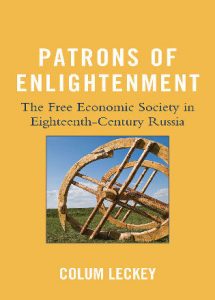 Patrons of Enlightenment is the first English language study of the St. Petersburg Free Economic Study, one of the most prestigious and influential public associations in Imperial Russian history. Established in 1765 under the personal protection of Catherine the Great, its mission was to enlighten the villages and country estates of the Russian Empire by spreading the gospel of scientific agriculture to noble landowners and the peasants working their land. Emulating the patriotic associations of Western and Central Europe, it also sought to put the finishing touches on the cultural westernization of Russia initiated by the reforming tsar Peter the Great. Within the walls of its meeting house in St. Petersburg, it offered a neutral space where people of different rank, status, and lineage assembled to debate the great issues of the day, above all else the role of a privileged and enlightened nobility in a society anchored in serfdom. For its network of readers and correspondents in the provinces, it provided an opportunity to earn distinction on Russia’s public stage through its voluminous publications and its flagship journal, the Transactions of the Free Economic Society. The Society provided the template for public activity and initiative in Imperial Russia, as hundreds of other organizations in the nineteenth century would emulate its example.