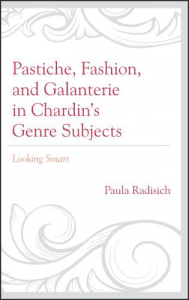 Pastiche, Fashion and Galanterie in Chardin’s Genre Subjects seeks to understand how Chardin’s genre subjects were composed and constructed to communicate certain things to the elites of Paris in the 1730s and 1740s. The book argues against the conventional view of Chardin as the transparent imitator of bourgeois life and values so ingrained in art history since the nineteenth century. Instead, it makes the case that these pictures were crafted to demonstrate the artist’s wit (esprit) and taste, traits linked to conventions of seventeenth-century galanterie. Early eighteenth-century Moderns like Jean-Siméon Chardin (1699–1779) embraced an aesthetic grounded upon a notion of beauty that could not be put into words—the je ne sais quoi. Despite its vagueness, this model of beauty was drawn from the present, departed from standards of formal beauty, and could only be known through the critical exercise of taste. Though selecting subjects from the present appears to be a simple matter, it was complicated by the fact that the modernizers expressed themselves through the vehicles of older, established forms. In Chardin’s case, he usually adapted the forms of seventeenth-century Dutch and Flemish genre painting in his genre subjects. This gambit required an audience familiar enough with the conventions of Lowlands art to grasp the play involved in a knowing imitation, or pastiche. Chardin’s first group of enthusiasts accordingly were collectors who bought works of living French artists as well as Dutch and Flemish masters from the previous century, notably aristocratic connoisseurs like the chevalier Antoine de la Roque and Count Carl-Gustaf Tessin.

About the Author
Paula Radisich is professor of art history at Whittier College.

“
Radisich’s discussion of complex but ineffable structures (the je ne sais quoi) at the heart of producing works in ‘the modern taste’ emphasizes the highly mediated, complex, and ingenious ways ordinary life is artistically represented.

“
Radisich’s book is valuable for the wealth of specific information she has gathered about the commercial and practical circumstances of Chardin’s immediate world (where he lived, what his second wife wore) and life. Eighteenth-Century Life