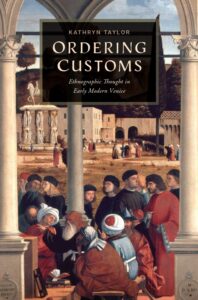 Ordering Customs explores how Renaissance Venetians sought to make sense of human difference in a period characterized by increasing global contact and a rapid acceleration of the circulation of information. Venice was at the center of both these developments. The book traces the emergence of a distinctive tradition of ethnographic writing that served as the basis for defining religious and cultural difference in new ways. Taylor draws on a trove of unpublished sources—diplomatic correspondence, court records, diaries, and inventories—to show that the study of customs, rituals, and ways of life not only became central in how Venetians sought to apprehend other peoples, but also had a very real impact at the level of policy, shaping how the Venetian state governed minority populations in the city and its empire. In contrast with the familiar image of ethnography as the product of overseas imperial and missionary encounters, the book points to a more complicated set of origins.

Kathryn Taylor is an Assistant Professor of History at the University of Tennessee at Chattanooga. Taylor specializes in the cultural and intellectual history of early modern Italy and the Mediterranean, with a focus on the history of cultural mediation, ethnography, and religious conversion.